Your Taxes Are Going Up - Save Calgary

It's been decided - your property taxes are going up.

On Monday, City Council voted 8-7 in favour of a plan to raise your property taxes by 3.45% in 2019 - they say this works out to a $105 increase for the average Calgary homeowner.

Here's how they voted on the tax hike plan: 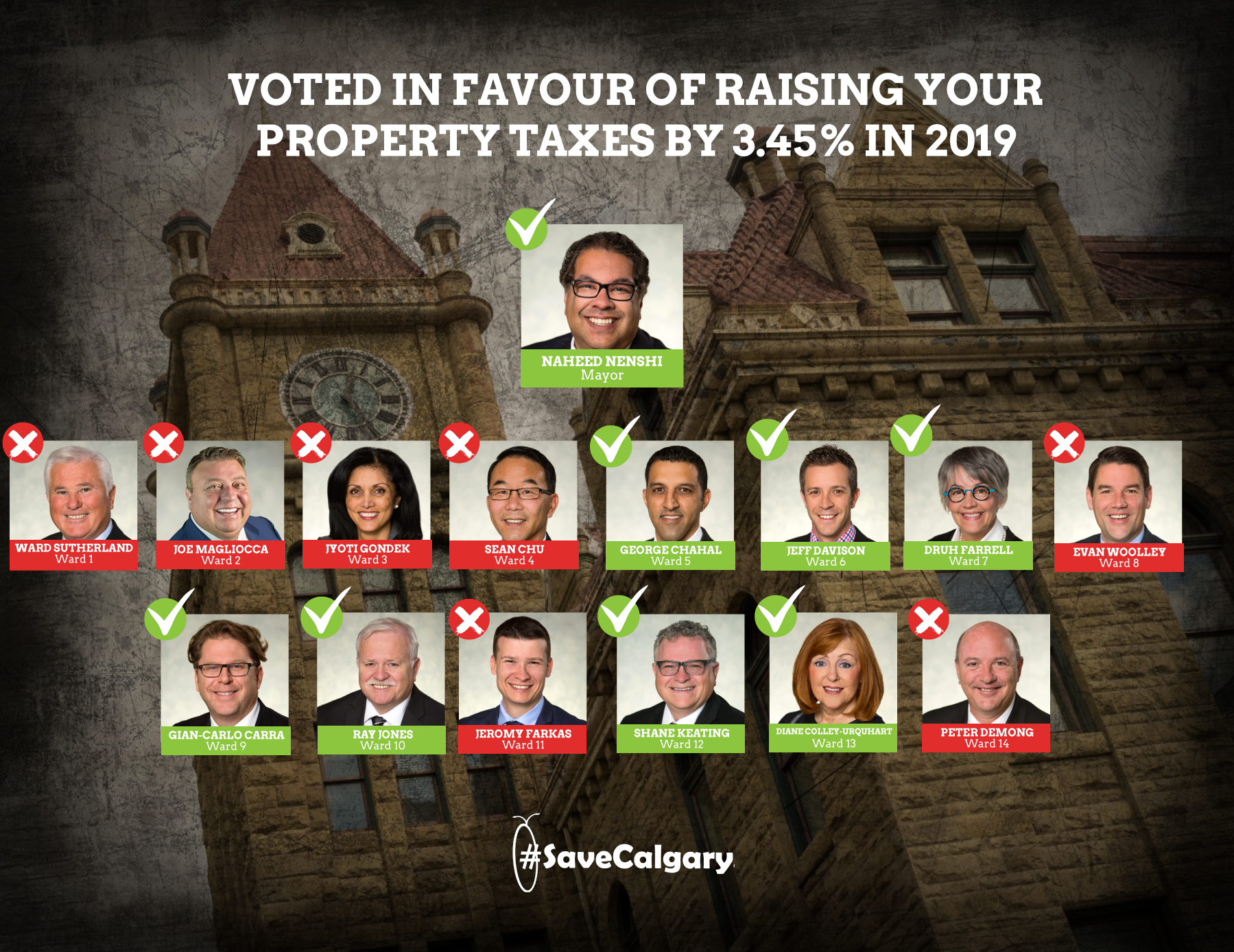 However, that's not all that Council decided after days of debate - here are the details:

Save Calgary is disappointed that property taxes are going up for homeowners again, but even more disappointed with the following news.

As you may recall, Ward 13 Councillor Diane Colley-Urquhart asked the City bureaucrats about the possibility of saving money by reducing City employee salaries.

With Calgarians in the private sector accepting wage cuts because of tough economic times, it is entirely reasonable that those employed by City Hall should also accept wage reductions.

City admin reported back yesterday that because of provincial rules and regulations about salaries, it is literally impossible to cut City employee salaries.

Assuming this is true (and that's a big assumption), and also assuming that this isn't news to City bigwigs who surely would have known about this for months given the debate about spending and taxes down at City Hall, it leaves an important question:

If we need provincial approval to cut City employee salaries, then why wasn't this included in the list of demands that the City of Calgary made of provincial political parties earlier this year?

Why has the City not asked the provincial government for permission to cut salaries?

The winds of change are blowing through Alberta. The era of big government and big spending is coming to a close, with Albertans poised to restore fiscal responsibility to their provincial government in Edmonton.

The first order of business for the City of Calgary with the next provincial government should be a request that they grant Calgary the ability to reduce employee salaries, wages, pensions, and benefits.

And then there's the so-called business grant approved by City Council yesterday.

Governments picking winners and losers in the private sector is always bad policy. Political interference, cronyism, bad judgement on the part of bureaucrats, and market distortions all arise when taxpayer dollars are used to support one business over another.

As of right now, we don't know any of the details around the grant program (other than the cost to taxpayers).

Save Calgary will be keeping a close eye on how this grant program is structured, and who ends up getting the money.

Let's not forget that the $100 million taxpayer slush fund - the Calgary Opportunity Investment Fund - gave its first donation to a close friend and donor of Mayor Naheed Nenshi.

Who you know at City Hall shouldn't influence how taxpayer dollars are spent.