After some extensive in depth investigative journalism, and maybe even a secret meeting in an empty Walmart parking lot under the cover of darkness, Calgary Sun reporter Rick Bell has uncovered our anonymous shadowy group known as 'Save Calgary'. 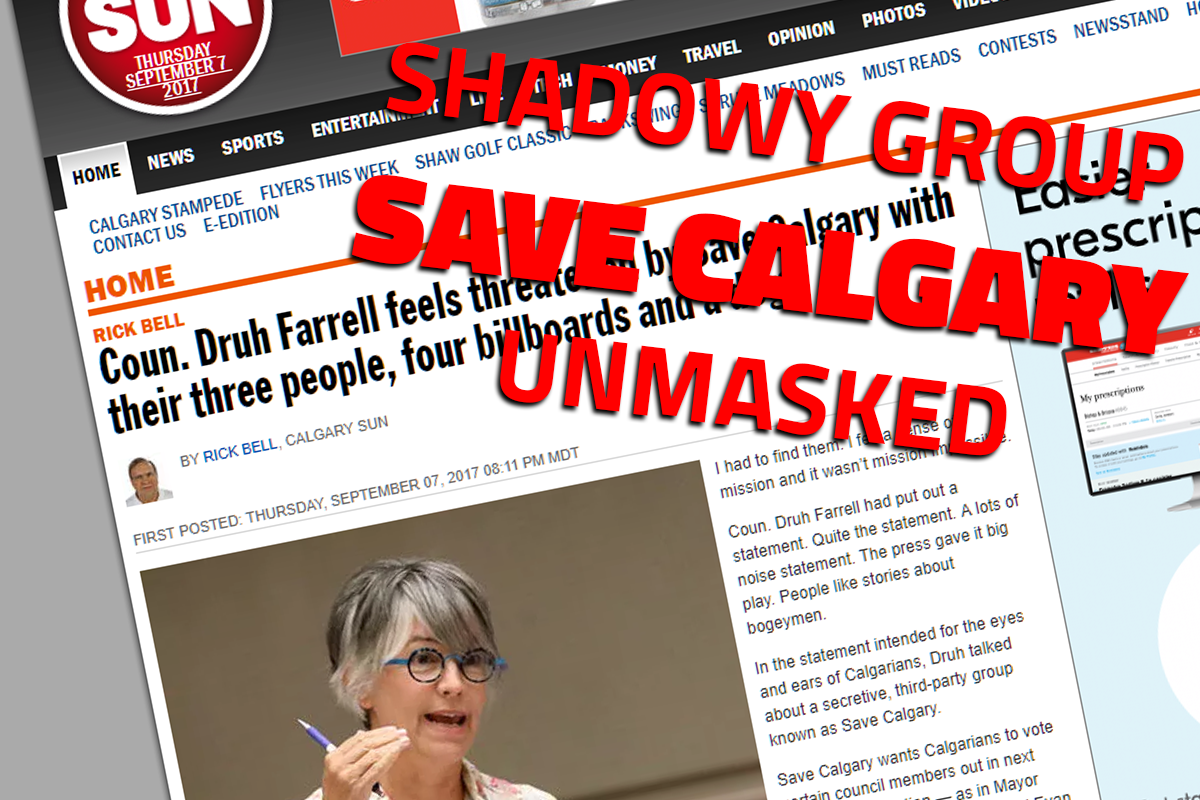 Coun. Druh Farrell feels threatened by Save Calgary with their three people, four billboards and a dog

I had to find them. I felt a sense of mission and it wasn’t mission impossible.

Coun. Druh Farrell had put out a statement. Quite the statement. A lots of noise statement. The press gave it big play. People like stories about bogeymen.

In the statement intended for the eyes and ears of Calgarians, Druh talked about a secretive, third-party group known as Save Calgary.

Save Calgary wants Calgarians to vote certain council members out in next month’s city election — as in Mayor Nenshi and Gian-Carlo Carra and Evan Woolley and Diane Colley-Urquhart and, of course, Druh.

“This group is a shadowy organization with no accountability,” says Druh.

According to Druh, the so-called shadowy outfit uses “U.S.-style tactics” and “big money” to influence the city election.

Funny thing. For a secret organization it doesn’t take long to locate the … insert sarcasm here … master operative of Save Calgary and meet them at an undisclosed location.

Druh says Save Calgary lives on the dark side and makes them sound very powerful. I decide not to take any chances.

I find out many things. Three people are active on Save Calgary’s day-to-day stuff.

They also have an lovely aging dog as a mascot. How appropriate since city council has gone to the dogs.

This alleged top-secret powerhouse has put up four billboards in the city. The billboards ask Calgarians to vote for change.

Their website is savecalgary.com and it has stories about city council stupidity and unflattering yarns on the five council members Save Calgary says are failing.

They even have material from yours truly. No accounting for taste.

Their logo is the Giant Blue Ring, a fitting monument to city hall.

Those supporting this group, small as it is, includes conservatives who believe certain people on city council should be booted out because of their sorry track record.

Small business owners have chipped in some dough. No surprise there. They aren’t amused with the asinine antics at the big blue playpen.

I wouldn’t be surprised if there were contributions from home builders but mention home builders to a certain crowd and it’s like you’re leaking nuclear secrets to Kim Jong-un.

As for big money, the group doesn’t have near enough cash to match the war chests of serious challengers for city council seats.

They have no hundreds of thousands of dollars in a bank account, waiting to be weaponized.

Save Calgary has been scoring more donations since they’ve got some attention and could end up buying some radio ads. Thanks Druh.

Their social media and their website point to the sins of city hall, the idiocies and the wasted taxpayer dollars and there is no shortage of material.

They would probably like to use the term “drain the swamp” but that would be … ahem … “U.S.-style politics.”

Still, Druh persists on her path. She calls on all council candidates to come clean on whether they have links to Save Calgary.

How’s that going so far?

Druh still sees a lot of connections to big money.

Hadyn Place is the go-to guy with Save Calgary.

“We’re flattered they think we’re some well-organized conspiracy but it’s a figment of her imagination,” says Place, adding Druh’s thoughts are a trifle “overactive.”

“They’re trying to distract from their own records. It’s funny they think we’re such a massive conspiracy.”

Save Calgary is not disclosing their donors. They’re not doing anything wrong. They’re not going to be bullied.

“He can attack pretty hard. He’ll dish it out but he can’t take it.”

For years, many conservatives skipped city politics. They were involved in the provincial and federal scene. With a few exceptions, conservatives left city government to the tax-and-spenders, the social engineers and the pushers of pet projects.

Now this small conservative pushback surfaces, this modest attempt to dislodge certain members of council, and claims of conspiracy fill the air.

Druh and the others are victims.