Who Voted to Release The Olympics - Save Calgary 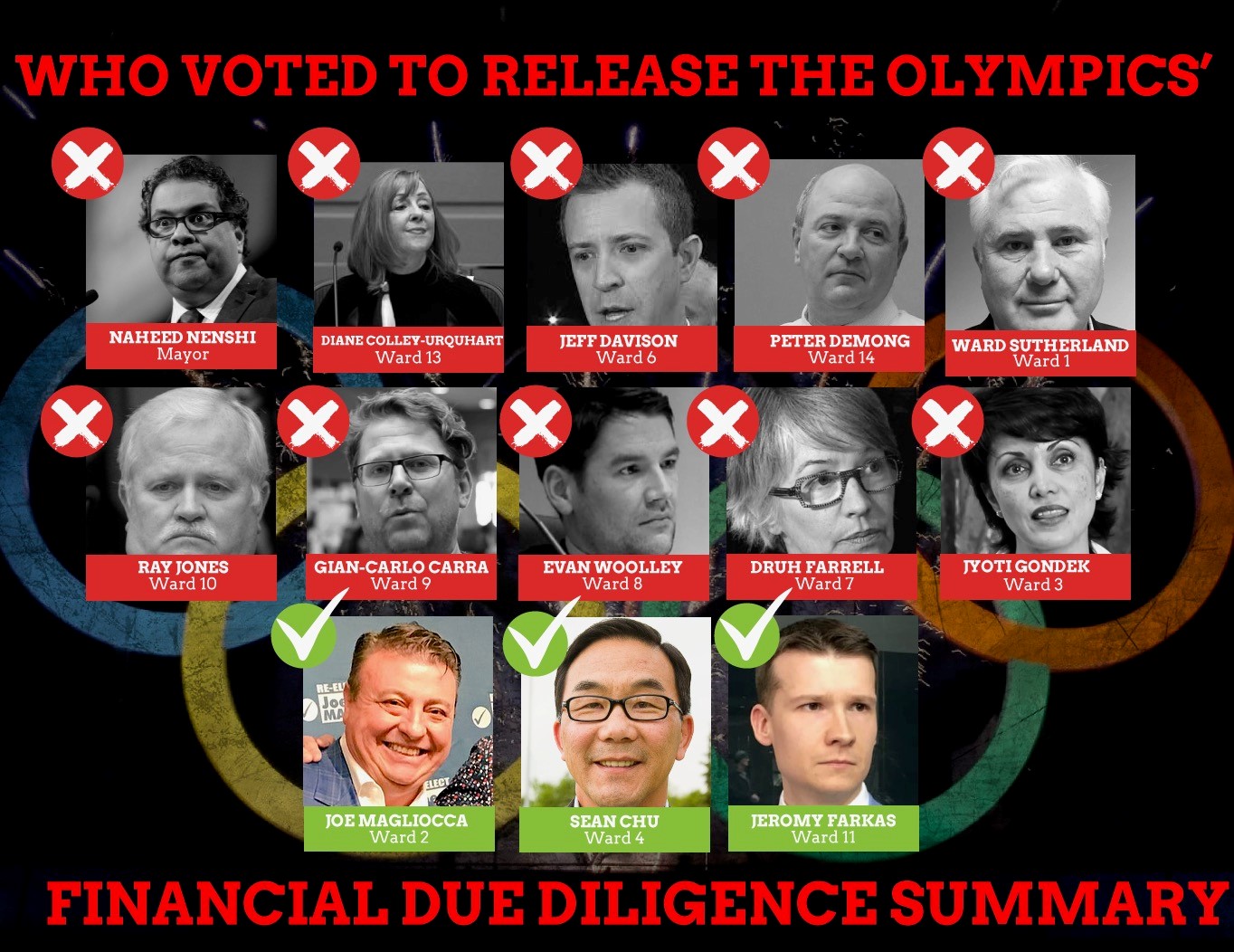 Save Calgary talks about our City Council governing "in secret" and making decisions "behind closed doors" a lot.

So much so, that some Councillors have said that we're just making stuff up when it comes to City Council withholding information from Calgary voters.

So, what exactly does it mean when we say Calgary's City Council makes decisions "behind closed doors?"

Well, we mean exactly that.

Many City Councillors have said that this is normal for a City Council, but that's just not true.

So, the claims by Councillors that this is normal procedure for a city council is just plain false.

But is this the only piece of evidence we have that Calgary City Council governs in secret without sharing information with everyday voters?

As you may recall, Save Calgary launched a Freedom of Information request to obtain a copy of a report into City Councillor misconduct. A heavily redacted copy of the report was provided to the CBC (we're still waiting for ours!) - both CBC and Save Calgary spent thousands of dollars trying to uncover which Councillors had behaved inappropriately while in office.

The City of Calgary was actually ordered to release this report but instead fought tooth and nail for months to prevent that from happening.

And they spent tens of thousands of your tax dollars in the process.

When Councillor Jeromy Farkas asked how much the City had spent on lawyers to keep the City Councillor misconduct report a secret, he was told that the cost was - wait for it - also a secret.

And as if weren't bad enough, that wasn't even the only example of our City Council trying to hide the truth that came out yesterday!

When it comes to the Olympics, Calgary Mayor Naheed Nenshi has said that Calgary's bid process is a model for the world.

We guess he meant a model of secrecy since that's been the hallmark of Calgary's Olympic bid to date.

When Calgary 2026 released their proposed Olympics hosting plan a few weeks ago, it included the first numbers Calgary has seen in terms of the real costs of hosting the Olympics. They pegged the cost at more than $5.2 billion.

After that presentation was done, our City Councillors - once again - went behind closed doors and in secret to get a "financial due diligence" report from City bureaucrats.

Apparently, that report raised serious questions about the costing provided by Calgary 2026 - namely, that their hosting plan didn't contain the full costing information, and that the actual costs would be much higher.

Councilor Jeromy Farkas put forward a motion that the financial due diligence report is made public, given the staggering cost of the Olympics and their potential to plunge Calgary deep into debt - that motion was defeated in a 12-3 vote.

For your information, here's how all City Councillors voted on releasing this information to the public:

The only reason we know that the costs presented by Calgary 2026 are too low is that someone leaked this tiny bit of information from the secret meeting - otherwise, we would have remained completely in the dark about this critical issue.

And what was the Mayor's response to the fact that a glimmer of real information had been provided to the taxpaying voters of Calgary?

Yesterday, he launched a witch hunt to find out who had committed the ultimate sin of telling Calgarians the truth.

He has called on the Integrity Commissioner to conduct a full investigation into the leak, including searching the cell phones and e-mails of City Councillors, in an attempt to identify the person who shared information from the secret meeting.

Witch hunts, lawyers, redacted reports, and secret meetings. This is what we mean when we say that Calgary City Council governs "in secret" and makes decisions "behind closed doors."

At Save Calgary, we believe that everyday voters shouldn't be kept in the dark about how our tax dollars are being spent.

Tell your City Councillor that enough is enough and that it's time they remembered that they work for us.

It's time to throw up the doors and let in the sunlight at Calgary's City Hall.