Nice Work If You Can Get It! - Save Calgary

The City of Calgary has released its annual compensation list - and just as it says in the classic song about working in Hollywood - it's nice work if you can get it!

So nice, in fact, that the ranks of the City's bureaucracy are continuing to swell with new and - as we know from disclosure - highly paid workers.

Roughly 30% of City of Calgary employees now earn more than $100,000 a year just in salary - not including benefit and pension costs.

And the news just gets worse from there.

The City of Calgary, famous for its closed door attitude towards releasing information, doesn't provide detailed information about positions and specific salaries, but rather provides "salary bands" for certain job categories, with gaping wage ranges.

They claim that this is to "protect privacy," but it also - coincidentally - prevents outsiders from getting a clear picture of just how much some employees are getting paid.

As we said, nice work if you can get it.

So how did we get into this mess in the first place?

It wasn't always the case that public sector workers were paid such lofty salaries. In fact, it was just the opposite.

When deciding whether or not to work in the private sector or the public sector, folks used to look at the trade-offs.

In the private sector, you would earn higher wages, but you would also get lower benefits, a less generous pension, and much less job security.

Conversely, if you joined the public sector, your salary would be lower, but you would enjoy top of the line benefits, a very generous pension, and near absolute job security.

Fast forward to today, and the change is stark.

Add onto that platinum benefits, generous lifetime pensions, and absolute job security, and it shows just how out of whack public sector compensation has become.

Who bears responsibility for allowing public sector wages to explode beyond all reason?

This problem didn't happen overnight. It happened year by year as city politicians gave in to increasingly outrageous union demands for higher wages and more perks.

In short, political cowardice is to blame for our current woes.

And speaking of rising public sector salaries, our City Councillors are also guilty of feathering their own nests. Here's a quick chart showing just how highly paid our municipal politicians have become: 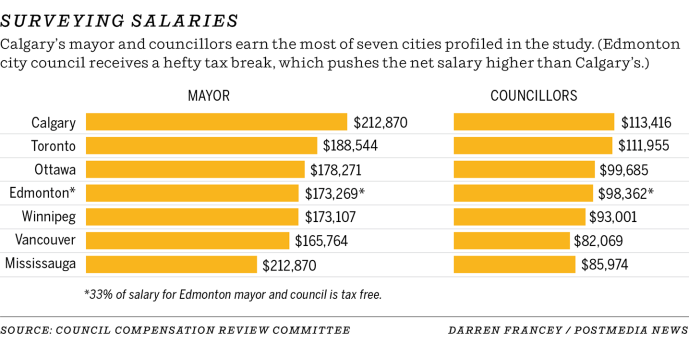 We want Calgary to be at the top of the list, just not when it comes to paying our politicians the highest salaries in the country.

Like a broken record, Save Calgary has been pushing for real, structural spending reforms down at City Hall, including across the board wage cuts, reductions in benefit costs, and ending defined benefit pension plans for City employees.

So where do City bureaucrats look for cost savings?

First, they said they would cut police and fire services. Voters were rightly outraged at the suggestion that the only cost savings that could be made were by putting the safety of our families and communities at risk.

And then, just yesterday, City bureaucrats released another list of potential cuts, and you'll never guess what was on the top of the list:

That's right, apparently the City of Calgary believes that the way to reduce costs is to take away bus and train passes from Calgary's poorest citizens, who are already struggling with a tough economy and high unemployment.

This is clearly an attempt on the part of bureaucrats to destroy the political will for future spending cuts, all while ignoring those areas which would yield actual and substantial cost savings for the City.

Since they seem completely unable to come up with any credible ideas on their own, we're happy to offer this initial suggestion for bringing back fiscal responsibility to City Hall -

Implement an immediate 10% salary cut for any City employee earning more than $100,000 per year.

Since apparently about one-third of all City employees fall into this category, a 10% cut to their salaries should represent a sizeable savings for the City, and would allow them to immediately cut small business taxes.

However, given their track record so far, we're not holding our breath that our City Council will show the political will necessary to solve this problem.

PS. Tired of having more and more of your tax dollars going to pay for salary increases for City bureaucrats? Donate to Save Calgary today and help us guard your wallet from pick-pocketing politicians!