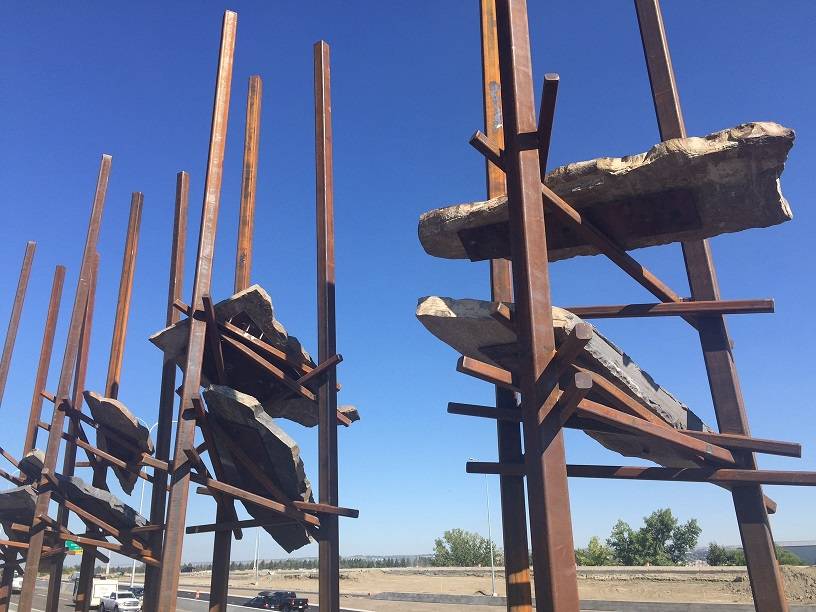 The mayor of Calgary has finally weighed in on the Bowfort Towers controversy, calling the uproar a "public lynch mob."

A week after the announcement of the contentious artwork, during a news conference at the provincial legislature unveiling the city charter, Mayor Naheed Nenshi said he is going to reserve judgement of the piece until he has seen it in person and when it is finished. Still to be installed on the other side of the towers are drumlines — oval-shaped mounds of earth which are left behind by receding glaciers.

"I think it's a bit dangerous to make judgements on something that's not done, that you haven't seen or experienced," said Nenshi.

The artwork, a quartet of steel beams cradling rocks is supposed to be representative of Blackfoot culture because of the use of the number four, which represents the four seasons, four stages of life. However, many in the Blackfoot community are concerned and angry about the towers looking too similar to traditional burial structures. Many have said if there had been proper consultation, there would have been a red flag raised on the similarities.

Nenshi is adamant that the seven person panel who decided on the artwork and city administration followed the art policy that was in place "to a T" and that it bothers him they are facing a "sort of public lynch mob."

"They worked very hard, they looked at different proposals and this is what they felt made sense for that location."

He added there was proper consultation with the Blackfoot people, referencing a "traditional knowledge keeper whose expertise is in the field of Blackfoot archaeology and symbolism" had been consulted on the project.

Adrian Stimson, a Blackfoot artist who applied for the project when the call for proposals went out but was disqualified when his application didn't make it to the right office on time, explained what a traditional knowledge keeper is.

"(It is) someone who has either grown up in and around their culture, who takes part in the social life of the First Nation or community, who understands various Indigenous protocols (and) they may be called upon to do ceremony," said Stimson.

Stimson said he questions what kind of consultation took place, saying since the announcement of the artwork, he's had several Blackfoot elders and members approach him on how they all see burial platforms and are expressing their disappointment with the city.

"Saying they had consultation is a cop out. They need to be very clear on what type of consultation and with whom. The person who they consulted may have missed the similarities altogether," said Stimson.

"This is why there needs to be a more comprehensive process, you can't expect one person to know everything or be responsible."