We've talked about pensions before - the City of Calgary has a pensions problem.

Calgary Mayor Naheed Nenshi gets not one, but TWO taxpayer-funded pensions.

And the pension burden on taxpayers to pay for City of Calgary employee pensions is unsustainable.

However, after months of pushing on this issue, there's a glimmer of light at the end of the pensions tunnel.

Councillor Farkas wants to reign in City Council pensions, which cost more than the pension costs for City Councillors in Edmonton, Ottawa, and Vancouver combined!

In fact, here's a helpful chart made by Councillor Farkas that shows just how much Calgary taxpayers are getting ripped-off when it comes to funding City Council pensions: 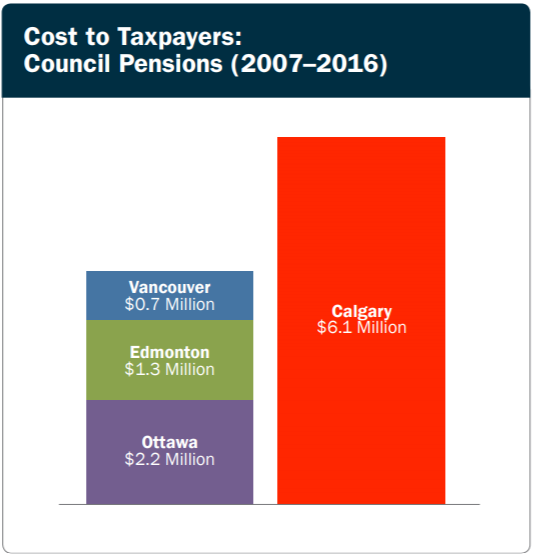 He also wants to eliminate the Mayor's Double-Double pension scheme - that's the one where he gets double the pensions for double-dipping into taxpayers' pockets.

As the Canadian Taxpayers Federation have pointed out, Mayor Nenshi is the only Mayor in Canada who receives TWO taxpayer-funded pensions.

As we've talked about in previous e-mails, City employees are enrolled in Defined Benefit Pension Plans. These plans to put taxpayers on the hook for decades of pension payouts to City employees.

In fact, some cities have even faced bankruptcy because of the burden that these outrageous pensions have put onto the backs of taxpayers - in fact, the City of Chicago and the State of Illinois are both on the verge of a full-blown financial crisis because of out of control pension costs.

With employees living longer, costs spiralling higher, and citizens pushed to the breaking point with tax increases, it is simply not possible to sustain the overly-generous pension plans being offered to City employees.

The issue of pensions has been a problem for years, but thanks to the work of groups like Save Calgary and others, we're finally seeing some movement on this most pressing of concerns.

Both of these motions will be voted on at Monday's Council meeting - we hope that City Councillors show real leadership and vote to move forward with public sector pension reform.

Either way, Save Calgary will be watching the vote, and we'll make sure you know how your Councillor voted on both pension motions.