Have you met City Hall's newest millionaires - Save Calgary 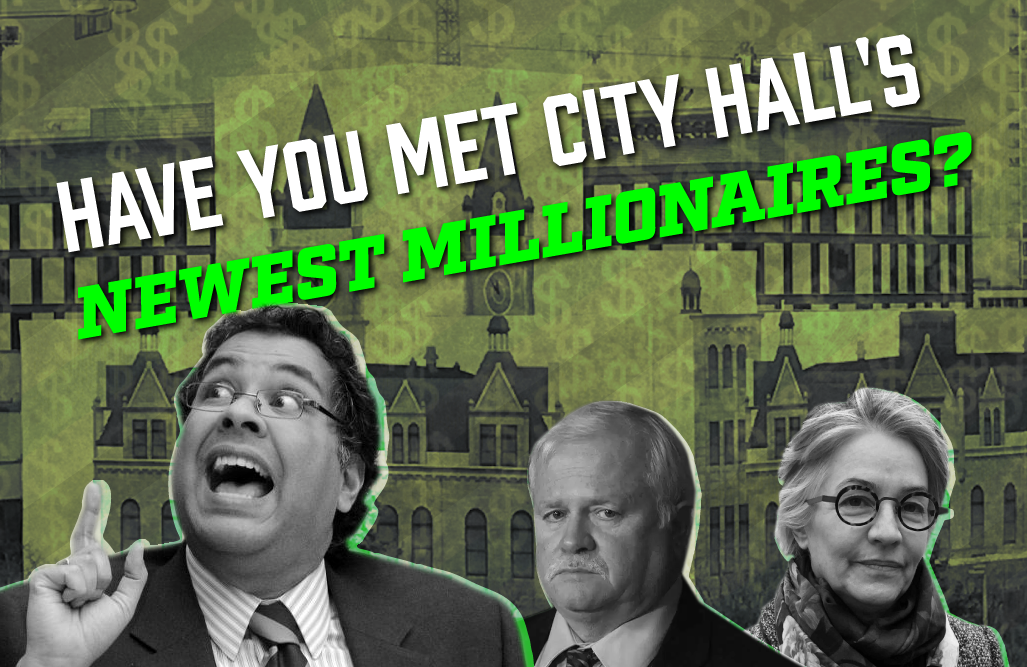 They're currently sitting on our City Council.

As Save Calgary has pointed out before, the City Council pension is one of the best perks of the job. In fact, some have likened it to the platinum pension plans that Alberta MLAs used to enjoy before taxpayers rose up in anger and nearly booted the government from office.

The Canadian Taxpayers Federation has released a new report into Calgary City Council pensions, and it shows that at least three of our Councillors are destined to become millionaires under the current plan. The CTF assessed what the total pension payout to the current City Councillors would be if they collected until age 85.

Which Councillors are in line for the million dollar payouts?

In each case, Councillors only contributed a fraction of what taxpayers did towards these lavish pensions.

In fact, on average, Councillors only put in $1 for every $5 put in by taxpayers.

The only exception is Councillor Jeromy Farkas (Ward 11) who opted out of the plan, citing its high cost to taxpayers.

This is completely unacceptable - especially as Calgary continues to struggle with high unemployment, business closures, and sluggish economy.

We don't actually know what the final cost will be for taxpayers, because periodically the City dumps in a bunch of extra taxpayer money into the pension plan to top it up. Millions of extra dollars have been paid into the City Council pension plan, with the costs going directly onto the backs of taxpayers in the form of higher property taxes, hiked up fees, larger surcharges, and bigger levies to the City.

However, the news gets worse when it comes to Mayor Nenshi.

He doesn't receive just one taxpayer-funded golden handshake - he gets two!

Because Mayor Nenshi is so highly paid - at a salary over $200,000 per year, he's one of Canada's highest paid mayors - he qualifies for the City of Calgary's "Supplementary Pension Plan for Elected Officials".

This second special pension plan is even more generous than the one Councillors receive - and both are funded nearly entirely by taxpayers.

The Mayor has suggested in previous public statements that the level of taxpayer funding for his pension - sorry, pensions - is pretty well standard for any pension plan.

That's just not the case.

First of all, how common is having two pension plans for a Mayor? Let's see what other cities do.

Brampton? No.
Edmonton? No.
Hamilton? No.
Mississauga? No.
Montreal? Non.
Ottawa? No.
Toronto? No.
Vancouver? No.
Winnipeg? No.

Also, for most pension plans, the ratio of funding is generally about 1:1 employer contribution per employee contribution - and that's if you're lucky enough to work for a company that offers a pension plan. In some really generous companies, that contribution ratio rises to 2:1.

But it's only in the taxpayer trough that is Calgary's City Hall that you see a ratio of $5 taxpayer dollars per $1 put in by a Councillor.

When Save Calgary first raised the alarm on this issue last year, we started a petition demanding that City Council scrap the platinum pension plan.

Today, we're renewing our call and demanding that City Council do away with this overly generous taxpayer-funded perk.

As Calgarians continue to struggle to find jobs, pay their bills, and make ends meet during these tough economic times, shouldn't our City Council at least take a break from putting our hard-earned tax dollars right into their pockets?

We'll keep pushing on this issue and how City Councillors respond - as a City Hall watchdog, that's our mission.