It was another thrilling week down at Calgary City Hall as City Councillors busied themselves with finding solutions to the City's ongoing business property tax crisis.

After hours of debate, Councillors revealed their latest step to addressing chronic overspending and high taxes in Calgary:

The City of Calgary actually owns six golf courses in Calgary, and collectively, they lost $2 million between 2015 and 2017.

Apart from the question of why the City owns something which in other jurisdictions is the sole purview of the private sector, we were curious about exactly why the City of Calgary seems so bad at running golf courses.

The answer won't come as a surprise to anyone who has been following Save Calgary over the past few months: salaries.

Since the golf courses are owned by the City of Calgary, those who work there are City employees, and earned the outrageously high salaries that have come to define the city's bloated bureaucracy.

Here is a quick breakdown of what golf courses employees earn at the City of Calgary compared to what they would be paid in the private sector:

In other words, the City is losing money on its golf courses because it is massively overpaying the folks who work there.

Given that the City's golf courses have been such a drain on taxpayers, you'd think they'd be looking to offload all of them to private sector buyers.

In fact, City Councillors only debated closing one city-owned golf course - Richmond Green - which loses between $150,000-$200,000 per year.

When the votes were counted, all City Councillors present and voting voted to proceed with the closure. Except one.

Mayor Naheed Nenshi apparently believed that throwing good money after bad on money-losing golf courses was the right choice, and he voted against closing Richmond Green.

City Council needs to stop fiddling while Rome burns and actually come up with a real plan to help Calgary businesses.

In the meantime, let's get the City out of the golf course business altogether.

If you're fed up with City Council's dawdling on Calgary's tax problem, then please consider making a $50 or $25 donation today to Save Calgary online so we can keep holding City Council's feet to the fire.

This week also brought to light another great example of public art here in the City of Calgary - the Great Plains Recreation Facility Public Art installation called One Puck Hollow.

Completed in 2016 at a cost of $150,000 to taxpayers, the City's website says the artwork: "took inspiration from key features of the hockey rink; the face-off circle, the red and blue lines, and the boards separating the rink from the spectator."

However, to the rest of us, it just looks like an emerging sinkhole that's been cordoned off for public safety reasons.

Here is a picture of the artwork in question: 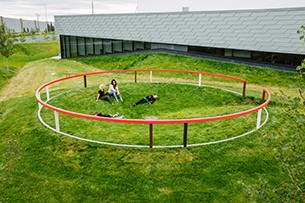 and here it is again at night: 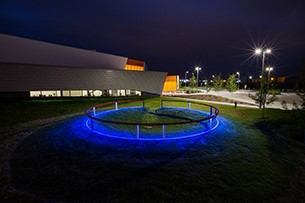 In true Calgary fashion, the only way everyday Calgarians would know that this is a piece of public art is if they are explicitly told that it is.

Save Calgary believes that we live in a great city - shouldn't we expect art that is as great as the hardworking folks who choose make Calgary their homes?

And when it comes to public art, why are we always mired in mediocrity?

Until the City of Calgary figures out how to fix its disastrous public art program, we believe it should stop paying for art that everybody hates.

P.S. Do you live or work near a piece of terrible public art? Save Calgary wants to know about it! Please send us a picture with the details to [email protected] and we'll make sure to shine a light on it!