On Monday night, City Council and the Calgary Flames released details of the proposed deal to build a new NHL hockey arena/event centre on the Stampede grounds.

We wanted to let you know where we stand on the deal, what we see as the benefits for Calgary, and how building this arena impacts the proposed cuts being discussed by City Council this week.

As our supporters, you know that we weren't prepared to take a position on any proposed arena deal until we saw the details of what was being proposed.

This is the same approach we took with Calgary's Olympics bid. Once it became clear to use that the deal involved putting taxpayers on the hook for potentially billions of dollars in risk for cost over-runs, resulting in staggeringly higher property taxes, we came out strongly against the deal.

For the arena, we had several concerns about any potential deal that we believe needed to be addressed before we could take a position on the issue.

This included ensuring that there was sufficient value for Calgarians, no increase to property taxes, and a guarantee that building the new arena would mean that the Calgary Flames would remain in Calgary.

We're pleased to see that these concerns were mostly addressed in the deal which was released on Monday night, and that this deal represents a significant improvement over the deal presented in 2017.

Here are some of the key points: 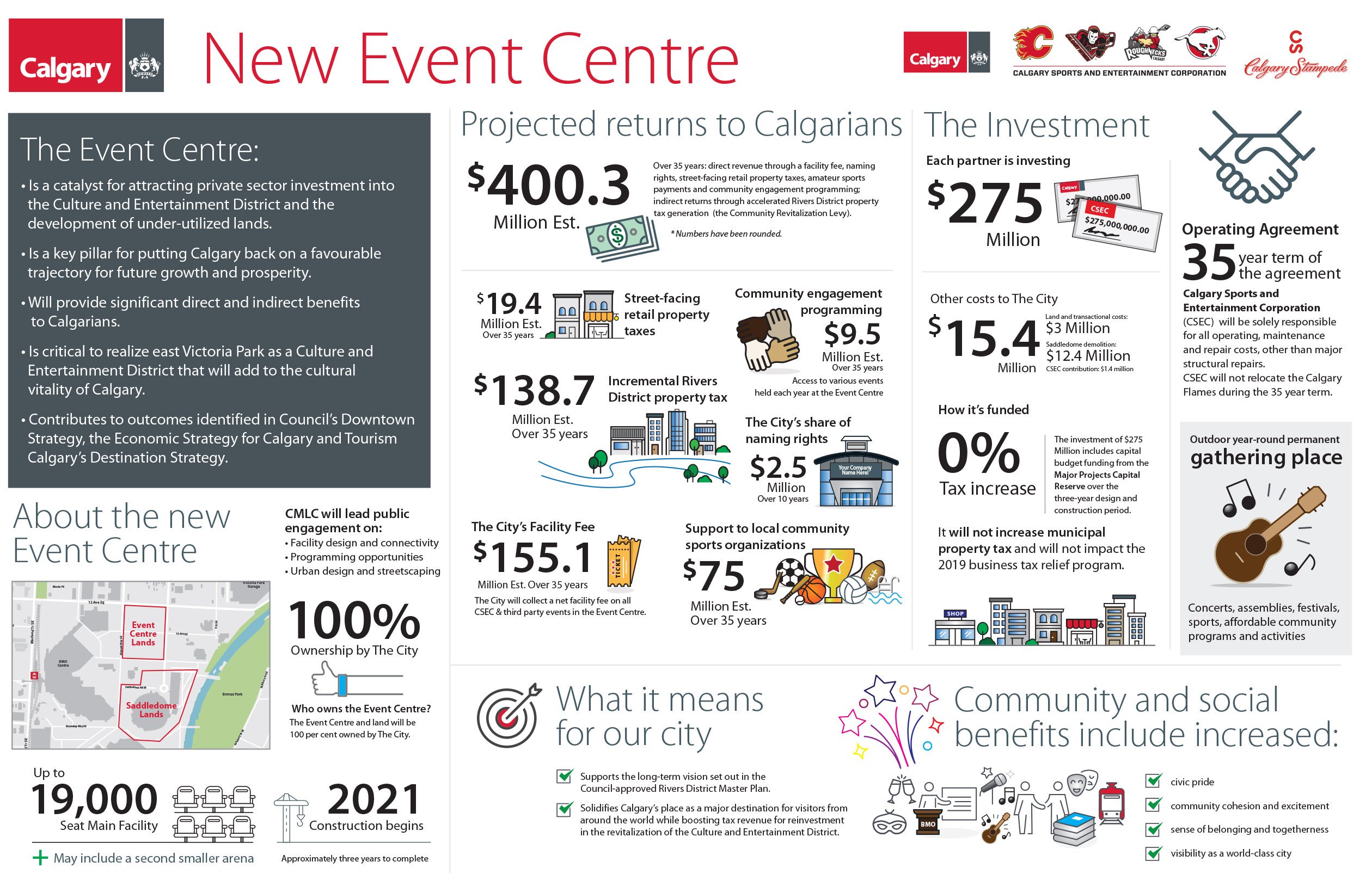 We believe that these points make the deal a reasonable choice for Calgarians, and ensure that Calgarians aren't facing the same risks and uncertainty that were present in the proposed Olympics deal.

However, while we cautiously support the arena deal, we are concerned about the very rushed period of time for taxpayers to provide their feedback to their elected City Councillors. We believe that a project of this size needs real public engagement, and that a public consultation period of less than one week isn't fair.

We urge our supporters to share their opinions with their local Councillor before Monday July 29th to make sure their views are heard before Council commits to this expensive project.

But this arena deal isn't the only important issue before City Council this week.

In early June, small businesses rallied in front of City Hall to sound the alarm about insane hikes to their property tax bills - some business owners were facing tax hikes in excess of 400%!

City Council responded by committing to finding $60 million in spending cuts, and directed City bureaucrats to present options for cutting spending that they could vote on.

What followed was a textbook example of bureaucracy in action.

Few politicians and senior bureaucrats support cutting spending. They'd much rather simply keep hiking taxes, ramping up spending, and growing the size of government. When faced with the prospect of making spending cuts, bureaucrats often adopt a time-tested strategy for preventing future rounds of cost-cutting.

They recommend cuts to the most popular public services that will elicit outrage from voters.

And that's just what the bureaucrats down at City Hall have done.

They've recommended a package of cuts to fire and police services, as well as ending funding for the low income transit pass program.

They're hoping that voter backlash will zap the will of City Council to pursue further cuts, and that the bureaucrats can get back to doing what they do best - squandering our tax dollars.

Save Calgary has been pushing for structural spending reforms for years. We saw this crisis coming as Calgary sunk into recession and major employers began laying-off staff and vacating the downtown office towers.

The professional political activists and special interests would have you believe that the choice facing Calgary now is between building a new arena and preserving frontline city services.

This is a false choice, designed to put Calgarians against each other. Don't let them trick you into believing it.

The solution isn't easy, but it's vital if we're to restore fiscal accountability down at City Hall.

We need to cut the high salaries, generous benefits, and platinum pensions of City employees, who haven't shared any of the pain that private sector workers have felt since our economic problems first began in 2014.

Since 2010, the City has hired 2,000 more employees and hiked spending by more than 40%. About one in three City workers earn more than $100,000 a year, and all of them enjoy unaffordable pensions.

When it comes to saving money, we shouldn't be cutting frontline services or putting Calgary families at risk, we should be making City salaries a bit less generous and bringing their benefits and pensions in-line with those in the private sector.

As we head into Monday's City Council vote on the arena deal, we know that some of our supporters will be disappointed with our cautious support for the new arena, and we respect that position. While we would have preferred a longer consultation period, and are disappointed that City Council didn't pursue that option, we believe that the deal negotiated between the City and the Flames is reasonable, and will ultimately be of benefit to Calgary in the long term.

We also believe that losing our city's hockey team would be a huge blow, and that this new arena will ensure that the Flames will remain part of the Calgary community for years to come.

PS. We do our best to stand up for the views and interests of everyday Calgarians - this is difficult when opinion is divided on a key issue like this arena project. We always want to hear from you, and to understand your opinions and concerns. Please share your views with us by e-mail at [email protected], or by posting to our Facebook page here!